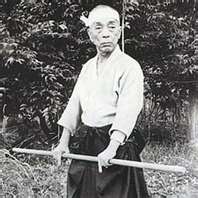 TAKAMATSU
TOSHITSUGU.
高松寿嗣was
born on March 10, 1889 in Hyogo Prefecture Japan. At the age of nine he began
studying the martial arts, and mastered the various styles from his grandfather
Toda Shinryuken, Ishitani Matsutaro, and Mizuta Yoshitaro
Tadafusa. Takamatsu Sensei was already an accomplished budoka by the time
he was a teenager, having won challenge matches against other martial artists
and sumotori. As a young man in his twenties he retreated to the
mountains of Kobe to continue his rigorous physical and spiritual practice.
After leaving the mountains he soon moved to China, and for the following 10
years he encountered many life and death situations in true fighting. He
reportedly fought many strong Chinese martial artists in mortal combat and used
his budo to defend himself against even wild animals.
In 1919, after
mastering the combat arts, Takamatsu Sensei returned to Japan in order to master
spiritual studies. He became the head monk at a mountain temple of esoteric
Buddhism in the Yamato district. In the 1950's he taught martial arts in Nara
prefecture; in 1957 he met Hatsumi Yoshiaki and groomed the young man to
become the successor to his rich martial arts legacy. Referred by Hatsumi Sensei
as the "last true combat ninja," the venerable Takamatsu Toshitsugu passed away
in May of 1972, at the age of 84 years. 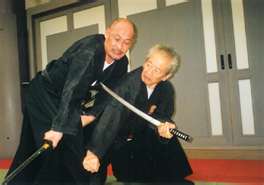 For over fifteen years Hatsumi trained under the supervision of
Takamatsu and in 1972, with the death of his teacher, Hatsumi Sensei became the
heir to the last and oldest ninja tradition existing